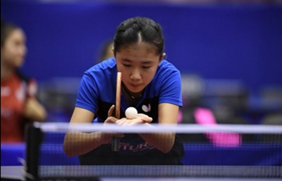 When I was 13, I had just entered high school and it was a new school too! I was trying to adjust to not only a new school but a higher level of education. To be honest, at this age I was just trying to go with the flow and trying to find a foot in society. But this is not the case for Malaysia’s Lee Xin Ni.

I thought I was awesome making new friends in a new school but Miss Lee is cooler than that. This 13-year-old has been busy playing table tennis. So busy that she recently won her third singles match win at the 2019 ITTF World Cadet Challenge in Wladyslawowo, Poland.

This Under 15 player is part of the International Table Tennis Federation (ITTF) Hopes team and her recent win meant that her team is going into the final round to meet team Europe.

Lee Xin Ni has been selected by ITTF to be a member for the 2019 World Hopes Team since 14 August, 2019. ITTF Hopes Programme is a series of events at national, regional, continental and world level featuring education, training camps, competition, and talent identification.

Selected Hopes team players must demonstrate qualities of sportsmanship, such as training ethics, respect for other players, coaches and teamwork.

In the 3rd group match against Latin America, Xin Ni playing as 3rd singles, beat Latin America player Divina Ding 3-0 (11-4,11-5,11-8). ITTF Hopes team went on to win 4-1 to be group champion. In the semi-finals playoff against Poland, Xin Ni again played 3rd singles and won 3-2 in an exciting, gruelling match, showing her steel despite under pressure to bring in the winning point. Xin Ni won her match 8-11, 12-10,11-8, 6-11,11-9 against  Polish player Ilona Sztwiertnia. ITTF Hopes team went on to win 3-1 against Poland.

Hopes team, however, lost 0-3 to team Europe in the Finals. Xin Ni did not play in the Final.

Table Tennis Association Malaysia (TTAM) Vice President, Dr. Chin Kuen Liang said, “Although Xin Ni did not get to play in the Final match, she has shown exemplary and commendable attitude and progress. There’s always a tremendous pressure playing in the 3rd singles to bring in the winning point and Xin Ni did it, demonstrating much maturity and skills in the two important matches.”

“We are pleased that TTAM’s plan to have smooth succession of players to become podium abled athletes of world standing, is moving in the right direction,” Dr. Chin added.