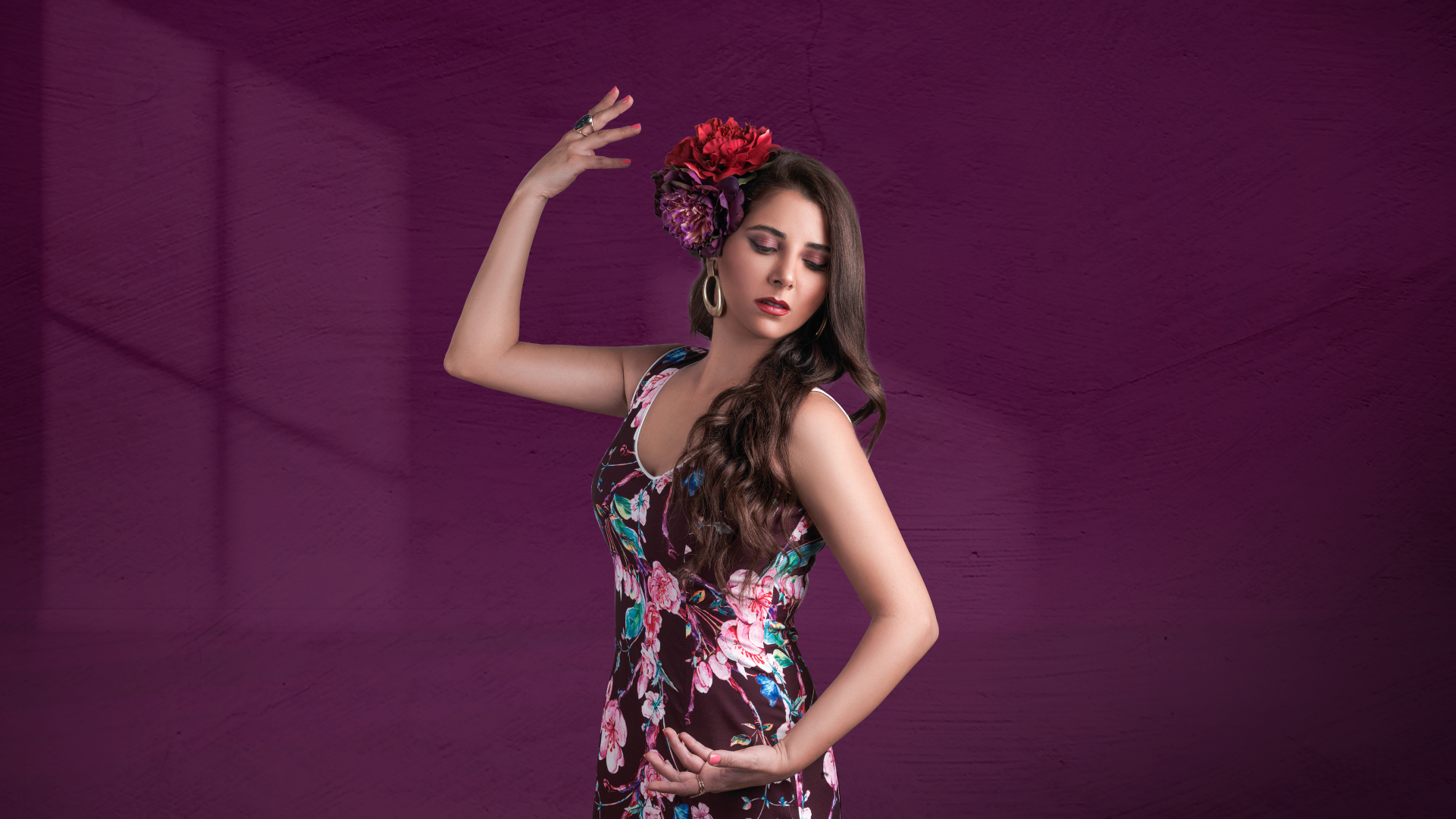 With her calming voice that flies over the world of flamenco along with the enchanting guitar rhythms, Haifa Kamal, an independent Jordanian singer, releases her mini-album “A Córdoba” (To Cordoba) in collaboration with Obaider, a Palestinian-founded Spanish flamenco band.

Three songs are released in this mini album on various digital music platforms, such as Anghami, Spotify, iTunes, YouTube, and SoundCloud, with each song including a ballad from a different era. While “Shamsu Ennahari” is by Safi Al Din Al Hilli, a fourteenth-century Arab poet, “Asafa Al Hawa” is by Sumaya Saleh, a contemporary Syrian poet, and “En Konta” is by eighteenth-century poet and priest, Nicolas Al Sayegh Al Halabi.

The melodic Spanish tunes that accompany Kamal’s soothing voice are composed and arranged by Obaider, an independent Palestinian band founded by Baider Burman and Obai Al Bitar. Musicians from Spain and Sweden alongside Obaider are behind the tunes of both “Shamsu Ennahari” and “Asafa Al Hawa,” while “En Konta” is composed and arranged by Alvaro Llanos, the bass guitarist in the band.

This iconic team has worked on the album since the outbreak of the coronavirus at the beginning of 2020. Difficult production conditions were imposed due to the lockdowns brought by the pandemic, which extended the music recording for months. With few hours in hand not controlled by quarantine, musicians participating from Spain, Sweden, Jordan, and Qatar found time to work on the project.

The musicians include Haifa Kamal as lead singer, Baider Burman, and Obai Al Bitar on the guitar, Alvaro Llanos as bass guitarist, Manuel Arango on the percussion, Yehia Najem and Alexandra Shabo as backing vocals, along with Najati Al Suloh managing the production.

Haifa Kamal, who aspires to present a new style in each of her projects, adds in this album a new color to her musical career. Like all of her previous productions, this production is also considered independent. She has previously produced “Denya”, an independent album in 2014, and “#TheEDMProject” in 2018, in addition to dozens of singles between her first album and the last one, released this year.

Despite its higher cost and longer completion time, Haifa Kamal says that she prefers independent production. This is because she can not only manage the quality but also seek diversity in each of her works. While this “independency” releases her from the stress of being limited to what is usually required from production companies, it also allows her to shape her musical identity.

It is worth noting that Kamal holds a bachelor’s degree in music from the National Music Conservatory – Jordan, with a concentration in Arabic singing. Although she released her first album in 2014, the beginning of her music career goes way back. Her father, the Palestinian composer and musician Kamal Khalil, discovered her talent when she was six. Since then, she became the youngest lead singer of his band, Baladna. She has also participated in several music projects, such as the Rum Tariq Al-Nasser Group, the Amman Band for Arabic Music, and the National Institute of Music Orchestra, as well as singing different theme songs for Arabic drama series such as “Laysa Saraban”, “Wish Raja’ak”, “Al Aswar”, “Samarkand” and others.

Kamal has also participated in many local music festivals such as Jerash Festival and Fuheis Festival in Jordan. She has also made an appearance in international festivals in Scotland, Cyprus, Tunisia, Opera House in Cairo, Qurain Festival in Kuwait, Opera House in Damascus, and National Day celebrations in the United Arab Emirates.

Obaider is a Palestinian band founded by Baider Burman and Obai Al Bitar, with the participation of musicians from Spain and Sweden. Mixing between Arabic poetry and Spanish Flamenco music, this Andalusian- style band brings different music tastes from all around the world together. They aim not only to show the beauty of the Arabic language but also to allow the youth to reach the language from a different perspective.