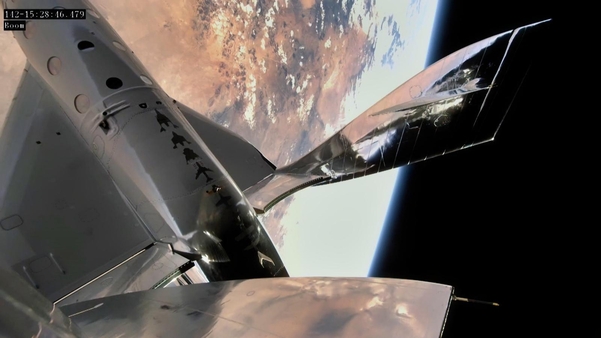 Like a scene from a movie, we introduce you to Virgin Galactic’s crew.

From left to right:

Collin Bennett, Lead Operations Engineer at Virgin Galactic. Bennett will evaluate cabin equipment, procedures, and experience during both the boost phase and in the weightless environment.

Beth Moses, Chief Astronaut Instructor at Virgin Galactic. Moses will serve as cabin lead and test director on Unity 22, overseeing the safe and efficient execution of the test flight objectives.

Sirisha Bandla, Vice President of Government Affairs and Research Operations at Virgin Galactic. Bandla will be evaluating the human-tended research experience, using an experiment from the University of Florida that requires several handheld fixation tubes that will be activated at various points in the flight profile.

Pilot, Kelly Latimer, the first woman to join Virgin Galactic pilot corps, she is NASA Armstrong Center’s first female research test pilot, a retired lieutenant colonel of the U.S. Air Force, and has logged more than 6,000 flight hours and 1,000 test flight hours during her work with NASA, the Air Force, and Boeing.

On 1st July 2021, Virgin Galactic announced that the flight window for the next rocket-powered test flight of its SpaceShipTwo Unity opens July 11, pending weather and technical checks.

The “Unity 22” mission will be the twenty-second flight test for VSS Unity and the Company’s fourth crewed spaceflight. It will also be the first to carry a full crew of two pilots and four mission specialists in the cabin, including the Company’s founder, Sir Richard Branson, who will be testing the private astronaut experience.

Building on the success of the Company’s most recent spaceflight in May, Unity 22 will focus on cabin and customer experience objectives, including:

For the first time, Virgin Galactic will share a global livestream of the spaceflight. Audiences around the world were able to log in virtually to view the take off of the Unity 22 test flight and witness the experience Virgin Galactic is creating for future astronauts.

Following this flight, the team will complete inspections of the vehicles and an extensive data review, which will inform the next steps in the test flight program. Two additional test flights are planned before the Company expects to commence commercial service in 2022.

“Our next flight—the 22nd flight test for VSS Unity and our first fully crewed flight test—is a testament to the dedication and technical brilliance of our entire team, and I’d like to extend a special thank you to our pilots and mission specialists, each of whom will be performing important work. Tapping into Sir Richard’s expertise and long history of creating amazing customer experiences will be invaluable as we work to open the wonder of space travel and create awe-inspiring journeys for our customers.”

“I truly believe that space belongs to all of us. After more than 16 years of research, engineering, and testing, Virgin Galactic stands at the vanguard of a new commercial space industry, which is set to open space to humankind and change the world for good. It’s one thing to have a dream of making space more accessible to all; it’s another for an incredible team to collectively turn that dream into reality. As part of a remarkable crew of mission specialists, I’m honoured to help validate the journey our future astronauts will undertake and ensure we deliver the unique customer experience people expect from Virgin.”

Team AFT will be following this closely. Is this truly the beginning of space travel tourism? What will Sir Richard be announcing when he returns from this test flight? Will this moment spark a generation of children with dreams to venture into space made real? Humanity has many things to think about… We wish the VSS Unity crew a safe and out of this world flight!

Announcement update: In partnership with Omaze and Space for Humanity, Virgin Galactic will be offering prospective astronauts a chance to make their dreams come true. AFT understands there’s two spots being given away as a ‘lottery’. Visit VirginGalactic.com to find out more.

All images and video content remain the copyright of Virgin Galactic. This post has been edited on 12th July 2021, 11:00am for clarity.