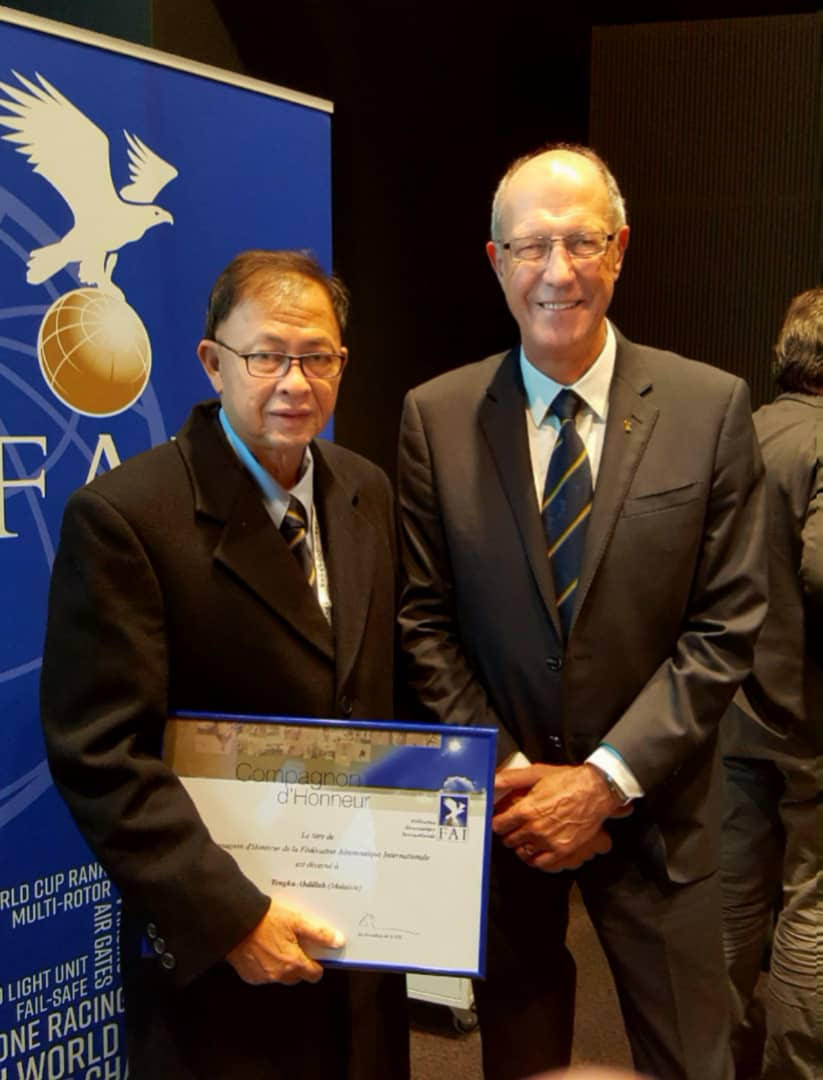 In a phone interview, Tengku shared his excitement.

When they mentioned my name, I was shocked and tears start coming from my eyes. I never never expected it, not at all. What I’ve done for FAI was just my passion and my love for airsports… After seven and a half years as regional Vice President of FAI, I’ve said that’s it, I’ve got to stop somewhere and end of this year, I’ll stop”.

“I started airsports by flying the aeromodelling aircraft with my son and a few of my friends. When the Department of Civil Aviation at that time decided to organise an air carnival, they wanted all activities of airsports to be there. A DCA representative contacted me, and I became the leader for aeromodelling… DCA was very happy, and after four air carnivals, they contacted me and mentioned that Tun Dr. Mahathir, the Prime Minister then asked to setup an Air Sports Federation. They gathered four disciplines; aeromodelling, parachuting, paragliding and hot air balloon and started the Malaysia Sport Aviation Federation. I was elected as MSAF President from 2012-2015 (correction: 2011-2015) and then concentrated on regional basis for the FAI, and then I was the one who initiated the AirSports Federation of Asia (AFA),”.

“Next year, I want to concentrate more time in Malaysia especially on drone, and eSports,”.

The 113th FAI General Conference took place in Lausanne, Switzerland, on 5 and 6 December 2019 and was attended by 110 delegates from Active, Associate, and Temporary Member Countries alongside International Affiliate Members, FAI elected Officers, Presidents of Honour, Companions of Honour, delegates appointed by Presidents of Commissions and Observers.

Tengku Abdillah will join a team of two Malaysian pilots at the 2019 FAI World Drone Racing Championships in Xiangshan Ningbo, China next week from 11-14 December 2019. The championship, which attracts over 100 top drone racing pilots from around the world is a major highlight in the international drone-racing circuit.

What is the FAI?

The FAI was founded in 1905 and is a non-governmental and non-profit making international organisation with the basic aim of furthering aeronautical and astronautical activities worldwide, ratifying world and continental records and coordinating the organisation of international competitions. It is recognised by the International Olympic Committee (IOC).

AsiaFitnessToday is a proud media supporter of the Malaysian team once again, having supported the pilots at the inaugural 2018 World Drone Racing Championships held in Shenzhen last year. Drone racing is adopted as a Move8 movement program for youth empowerment. Find out more: www.move8.org.