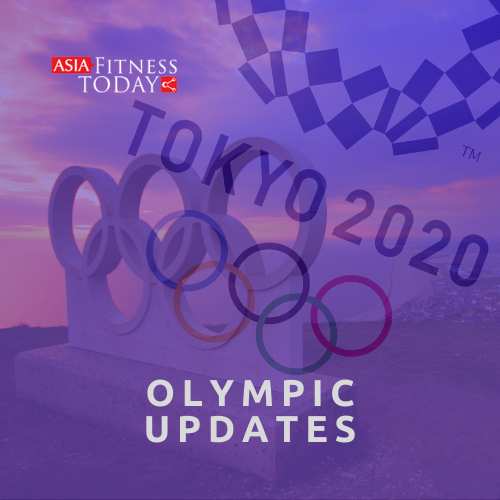 Asian athletes had a record medal haul at Tokyo 2020, with the region growing ever more prominent since Japan became the Games' first Asian host in 1964.

OVERALL Australia’s fourth place medal ranking at Tokyo 2020 was impressive, the best so far and received a congratulatory acknowledgement from the Australian Institute of Sport (read more). Watersport was a winner with 35 Aussies competing in the swimming pool and 26 in water polo, with a total of 483 participants for Team Australia. Medals were brought home in these areas of sport; athletics, basketball, beach volleyball, boxing, canoe, cycling bmx, cycling track, diving, equestrian, hockey, rowing, skateboard, sailing, swimming & tennis.

CYCLING KEIRIN Silver medalist Mohd Azizulhasni Awang of Team Malaysia was pride of his country during the medal ceremony at the Men’s Keirin final on day 16 at Izu Velodrome in Shizuoka. The 33-year-old’s hope for gold was crushed by Great Britain’s Jason Kenny. Known as the “Pocket Rocketman”, Azizulhasni is now the proud owner of two Olympic medals after winning a bronze in Rio 2016.

DIVING WRAP-UP Singaporean diver Jonathan Chang’s journey to Tokyo 2020 stemmed from a Youth Olympic Games (YOG) spectator in 2010 and competitor in 2014, to the Tokyo 2020 Games where he is set to become his nation’s first male Olympic diver.

Wang Yi Lyu and Huang Dong Ping had lost 10 of 12 finals to Zheng Si Wei and Huang Ya Qiong, but with their superlative show in the #Tokyo2020 final, the challengers stepped out of the shadows of their illustrious compatriots.@Olympics #RaiseARacket 🏸https://t.co/PRxyMKhnAn

BADMINTON, MEN’S DOUBLES Lee Yang and Wang Chi-Lin, representing Chinese Taipei are the happy Gold Medallists winning against China’s Li Jun Hui and Liu Yu Chen on day eight of the Tokyo 2020 Olympic Games at Musashino Forest Sport Plaza. The game lasted 34 minutes with a score: 21-18, 21-12. No. 2 seeds, Indonesia’s Mohammad Ahsan and Hendra Setiawan were beaten by the same Chinese Taipei pair 21-11, 21-10 in one of the two semifinals, and Malaysians Aaron Chia and Soh Wooi Yik take home the Bronze.

A huge surprise but a gleam evident on the faces of Greysia Polii and Apriyani Rahayu for bringing home Indonesia’s first ever Olympic Women’s Doubles Gold, while China’s Chen Qing Chen and Jia Yi Fan settle for silver on day ten. Republic of Korea’s Kim Soyeong and Kong Heeyong won the bronze medal.

Wang Yi Lyu and Huang Dong Ping of China win gold in an all China final! They beat Zheng Si Wei and Huang Ya Qiong after a thrilling final. Japan’s WATANABE Yuta and HIGASHINO Arisa won the bronze medal against TANG Chun Man and TSE Ying Suet from Hong Kong, China in two straight sets 21-17 and 23-21.

BADMINTON, MEN’S SINGLES China’s CHEN Long, the only reigning champion to defend his title in Japan against Denmark’s Viktor Axelsen in the gold-medal match will have to be happy with a silver. Anthony Ginting of Indonesia brings home the bronze after a 21-11, 21-13 against Kevin Cordon of Guatemala, the first Latin American player to reach the semi-finals of an Olympic badminton tournament.

ARTISTIC GYMNASTICS She’s the first gymnast of Asian descent to win the women’s all-round. She’s from Minnesota, USA and also the first Hmong-American to make the Olympic team. #hmong

She did it. @sunisalee_ is the queen of the women’s gymnastics all-around finals and her parents. OMG. Tears every where. 🥺 #Gold #TokyoOlympics #hmong pic.twitter.com/n2xM7VJOPq

TABLE TENNIS China vs. China CHEN Meng has won over country mate SUN Yingsha in the Women’s Singles to bring home Gold and Silver. Japan’s ITO Mima wins the Bronze, her second medal after winning Gold at the mixed doubles yesterday. China has won every gold medal in women’s singles since the sport’s Olympic debut in Seoul 1988.

In the 200m Women’s Butterfly, ZHANG Yufei (CHN) takes the gold in a new Olympic record time 2:03.86, with USA’s Smith in second and Flickinger taking bronze.

Aussies golden girl Ariarne Titmus (AUS) wins top spot and sets an Olympic record of 1:53.92 for the 400m! Silver for Haughey and bronze to Oleksiak – Ledecky was fifth.

Congratulations to the Asian Athletes for making it to the QUARTER FINALS for WOMEN’S DOUBLES!! 👏👏👏 pic.twitter.com/ctNipH3tnL

26/7/2021 SUMMARY: Athletes from 46 countries have clinched medals and of that, 11 are Asia Pacific countries with host nation Japan leading the way at top No. 1 spot, P.R. of China in 3rd place, R. of Korea in 6th place followed by Australia in 7th position. Tied on 16th spot are Hong Kong, China, Philippines & Thailand, Chinese Taipei in 25th and Indonesia 28th place, India 33rd and New Zealand 46th.

Medal tally as of today, with APAC countries pinned

24/7/21: WEIGHTLIFTING Congratulations team Indonesia – women’s weightlifting (49KG) Windy Cantikah Aisah for winning the first medal for ASEAN nations. She registered a total lift of 194kg, with a snatch of 84kg and a clean and jerk of 110kg, coming in third place after India (silver) and China (gold).

IOC president Thomas Bach presented Yang with her gold medal, as well as silver to Anastasiia Galashina from ROC and the bronze to Switzerland’s Nina Christen, but due to COVID-19 countermeasures in these unique Games, they collected their own medals from a tray and placed it around their own necks.

“This feeling of togetherness – this is the light at the end of the dark tunnel.

The pandemic forced us to be apart. To keep our distance from each other. To stay away even from our loved ones. This separation made this tunnel so dark.

But today, wherever in the world you may be, we are united in sharing this moment together. The Olympic flame makes this light shine brighter for all of us…” Source: IOC

Indonesia, which is the world’s fourth most populous country with more than 270 million people, is trying to become only the fourth Asian country to host the Games after Japan, China and South Korea. Source: The Star

Commissioned by the Olympic Foundation for Culture and Heritage (OFCH), and produced by the Academy Award-nominated Yoshiaki Nishimura of Studio Ponoc, the film provides a fresh perspective on the Olympic values of excellence, friendship and respect. Source: IOC

Gangwon 2024 draws upon the successful delivery of the Olympic Winter Games PyeongChang 2018, and aims to continue their vision of bringing winter sport to a new generation of athletes.

Dakar 2026 – The postponement of the Dakar Youth Olympic Games from 2022 to 2026 will strengthen the mobilisation of young people in the organisation.

International Olympic Committee Members today voted to elect Brisbane 2032 as host of the Games of the XXXV Olympiad. Brisbane received 72 yes and 5 no votes from 77 valid votes.

The members of the IOC Refugee Olympic Team (EOR) Tokyo 2020 were welcomed today by the IOC Session. Athlete representative Yiech Pur Biel addressed the IOC Members on behalf of the team. Biel competed at the first Refugee Olympic Team Rio 2016. He said, “My experience of being part of the Refugee Olympic Team changed my life. It opened up opportunities for me, such as joining the Olympic Refuge Foundation as a Board member, becoming a Goodwill Ambassador for the UNHCR and moving to train and live in the United States of America. I would never have thought that my dreams would become a reality when living in the Kakuma refugee settlement in northern Kenya. Most importantly, I can now call myself an Olympian, which makes me proud every day.”

21 July: Actual competition starts two days before the Opening Ceremony with softball in Fukushima – in line with the Games’s theme of recovery.

24 July: The first medals of the Games are awarded on 24 July in the women’s 10m air rifle shooting event. 11 medal events takes place today including judo, the sport in which Japan normally wins their first medal of an Olympics. New sport, 3×3 basketball will take court.

1 August: “Golden Sunday” will see 25 gold medals given out, including the men’s 100m in athletics as well as four artistic gymnastics events. The men’s tennis singles final is also on the cards.

7 August: Tokyo 2020 peaks today with 34 medal events being held, such as the women’s marathon in Sapporo and the finals for baseball, men’s basketball, football and volleyball.