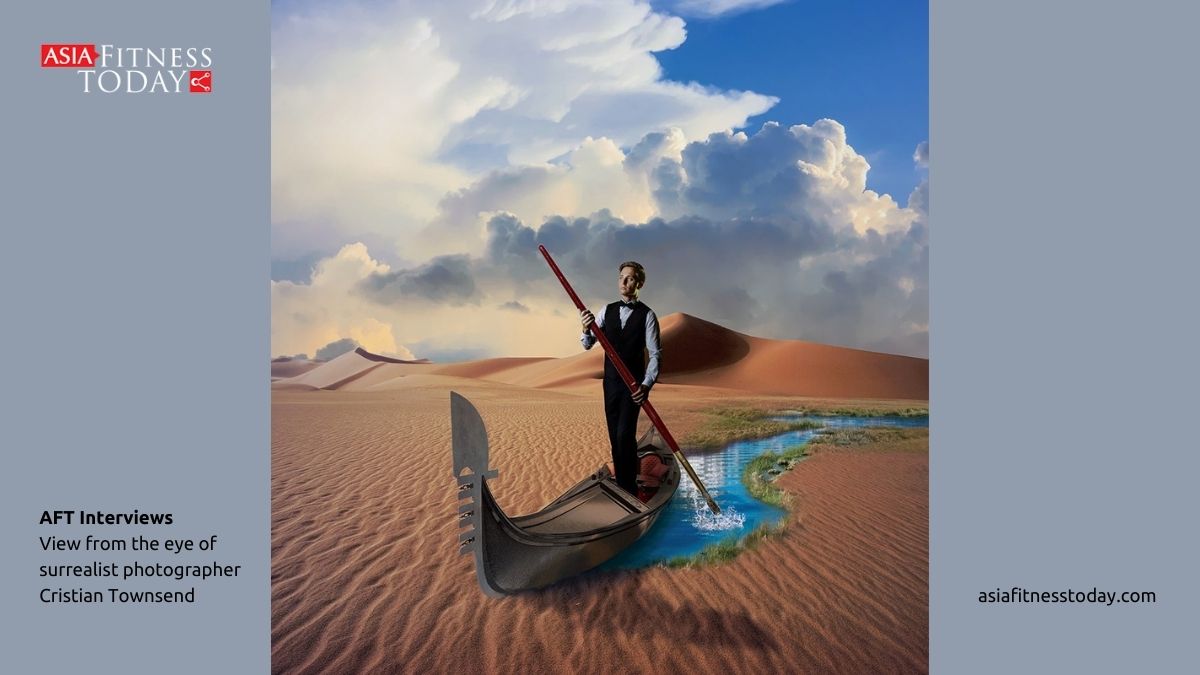 Some photographs maybe be inappropriate for younger viewers. Discretion is advised. For viewers of age, this is art. Please do not proceed if nudity offends you.

Twice Gold Award-winner for ‘Fairy Tales’ (2017), Special Photographer of the Year and ‘The Circus of Extinction’ (2020) 1st Place / Special/Digitally Enhanced at the prestigious International Photography Awards (IPA) in New York, Cristian Townsend is a West Australian, living and working in Osaka, Japan.

Through dreamlike photomontages, he questions and push boundaries beyond cultural conventions… in order to seek truth. Inspired by Surrealism’s provocation and Buddhist philosophy, Townsend was one of 124 participants from 52 different countries who exhibited their works at the 14th edition of The International Surrealism Now Exhibition held in May 2021 at the Center of Arts and Spectacle (CAE) in the city of Figueira da Foz in Portugal, a project created by Santiago Ribeiro, Portuguese surrealist artist. The exhibition is the largest exhibition of surrealism of the 21st century in the world, consisting of works of painting, drawing, digital art, sculpture, and photography.

In an email interview, team AFT asks Townsend about his artistic direction and inspirations. His photomontages use motifs from Classical to Modernist Art, from War-time Propaganda to Modern Advertising, the Cinema, the Mass Media and Science Fiction.

AFT: Which pieces of works did exhibit at the International Surrealism NOW exhibition, and why did you choose those pieces?

Townsend: Santiago Ribeiro has been a driving force in the visionary art scene. The International Surrealism NOW exhibition is an amazing effort and I’m very happy to be included in it. I have two photos in this exhibition. Both are older works.

One is called Gondola in the Desert. It was inspired by a trip to Venice and is about the power of creativity.

The other image is called Body Politik: Monarchy. This is part of a series that expresses some political ideologies as human bodies fighting against themselves. Most political Art is propaganda and usually depicts the desired ideology as an Utopian ideal. I wanted to depict ideology as something that is in flux and that is in constant conflict. With the rise of ideology in recent times I think that is an important point.

AFT: Tell us about your environment, while growing up.

Townsend: I grew up in Perth, Western Australia. My family were English and they moved to Australia when I was two. My father worked in TV, first at the BBC, working on TV shows like Dr Who, and then at the ABC in Australia. He was also a photographer who took photos of local and international celebrities. He gave me a basic camera when I was a kid, and I used to take photos of my toys putting them in dioramas. Also, there were many art and photo books around the house, which fired my imagination. I was always interested in fantasy and Surrealism from a young age. There were photo books on Bill Brandt, Man Ray, Helmut Newton, Horst, Beaton, Uelsmann and many others. These photographers still inspire me today.

I used to draw and paint a lot as a child. Eventually I got into a Special Art program at High School. It taught me different painting and photography techniques as well as Art History. The well known children’s book artist Shaun Tan also went to the same high school.

AFT: What or who were your influences?

Townsend: My dad had a traditional darkroom and, inspired by Surrealist painters and particularly Jerry Uelsmann’s and Man Ray’s pre Photoshop photomontages, I started to experiment with my own style. First I used lith film masks to create photomontages. I had some promising early success; I got published in some local magazines and started winning some local awards. After I finished studying communications at university I started working for one of the first digital photo labs in Perth. I used to do all the retouching and photo manipulation for local photographers.

I love Surrealism, but I don’t really believe in Art categories. The artists that I have always admired are the Visionary artists like Bosch, DaVinci Goya, Dali, Magritte, Moreau, Redon and many others. The world we live in is full of cliches. The best artists in my view, open up the world of imagination and the possibilities of what can be achieved. This is even more important these days of political divisiveness and misinformation.

AFT: What is the one thing you strive to do with your art? Have you been successful?

Townsend: Art, primarily, should be about expressing truth through personal symbolism. For me, it is all about trying to understand the complexity of the world in a deeper, symbolic way, even if that may be disturbing or controversial to some.

I hope to have symbolic consistency and a unique worldview in my photographs. I think I’m getting closer to achieving that. I have also won many international awards recently. From the Px3 in France to the International Photography Awards in New York, where I won photographer of the year in my category and attended the awards ceremony at Carnegie Hall. Definitely a highlight in my career.

Artists need to be flexible. Photographers especially rely on others; models, dancers, and makeup artists for example. Although it is important to have vision, it is essential to use the creativity of others in your work. I have been lucky to know many creative people who have wanted to collaborate with me. Some have even made their own prop and costumes for the shoots!

AFT: Did you produce any work during Covid-19?

When COVID 19 became an international incident I was working on my latest series ‘The Circus of Extinction’. This series is about the ‘Circus’ of life and how our darker impulses are leading us to disaster. I was lucky that the series was mostly complete. I had one more photo to finish, which involved ‘a Tattooed Lady’. I had many of the elements photographed already, but I started to have many scheduling problems. However, I managed to finish the image before Osaka went into shut down.

AFT: Is there any work that you have not finished or can’t complete?

With photography many things can go wrong: Talent gets sick, bad weather, you name it and it can go wrong. I usually have contingency plans. Of course some things come together easily, and others are a real struggle. Sometimes the struggle can make the work stronger. It’s like bad weather. Sometimes you get storm clouds or rain, but the unexpected weather can sometimes produce better results. More beautiful clouds or dramatic lighting. Etcetera. Sometimes you have to abandon plans for different reasons. I did attempt to do a series based on Tarot imagery, but that was not completed. I think I was not ready at the time for such an undertaking. I often return to images and ideas. Artists are obsessive people. So I might end up finishing it someday. Who knows. My main goal is to remain open to new possibilities and not become obsessed with unfinished projects.

AFT: Is health and fitness important to you? Do share some of your daily routines.

As far as my health is concerned, I do try and eat healthy food. Particularly green vegetables and whole grain or rye bread. I also try to restrict carbs in my diet. My wife sometimes bakes bread though. Fresh rye bread is my favourite. We live in Japan, so fish is an important part of my diet. I love Salmon and often cook baked Salmon and fresh herbs. We have a small herb garden. We often use dill, basil and coriander in our cooking. There is a gym near our house. I used to exercise regularly, but after the gyms have shut, I often take my 3 kids out walking at a big park near our house. Spending time with my kids and exercising is a great way to keep mentally and physically healthy and grounded.

AFT: What is your ultimate favourite thing to do?

Life can be tough, but being open to it’s beauty and rich complexity is essential. It is my ultimate goal to create work that reflects the lightness and darkness of the world, and for that work to reach people in a deep way, beyond financial gain. I also want to lead a full life, and travel to many wonderful places with my family and show them the incredible diversity of life and world cultures.

Surrealism was an artistic, intellectual, and literary movement led by poet André Breton from 1924 through World War II. The Surrealists sought to overthrow the oppressive rules of modern society by demolishing its backbone of rational thought. To do so, they attempted to tap into the “superior reality” of the subconscious mind. “Completely against the tide,” said Breton, “in a violent reaction against the impoverishment and sterility of thought processes that resulted from centuries of rationalism, we turned toward the marvelous and advocated it unconditionally.”