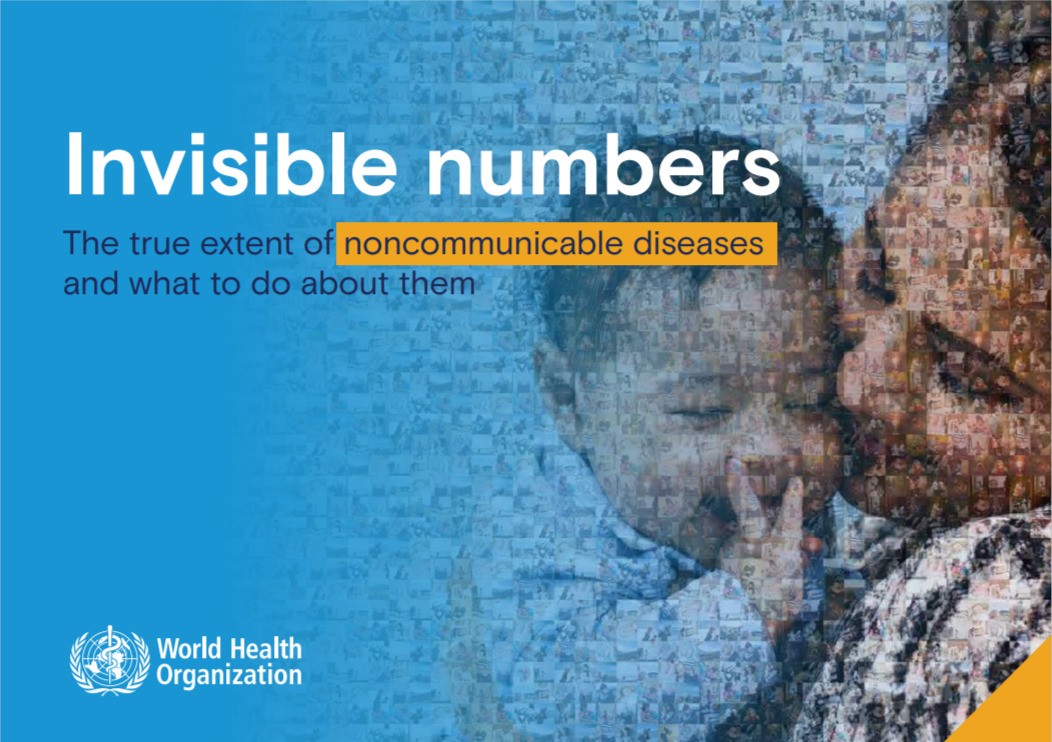 To accelerate action Dr Tedros renewed the two-year appointment of Michael R. Bloomberg as WHO Global Ambassador for Noncommunicable Diseases and Injuries. This is Bloomberg’s third reappointment as Ambassador, having first been appointed to the role in 2016.

The announcement came at the first annual gathering of a Heads of State and Government Group for the Prevention of NCDs, led by the President of Ghana and the Prime Minister of Norway,  held during the 77th Session of the United Nations General Assembly (UNGA). This follows the launch of a Global NCD Compact earlier this year by Ghana and Norway.

To mark the occasion, WHO released a new report, “Invisible Numbers: The true scale of noncommunicable diseases,” and a data portal that for the first time, brings together all WHO data related to NCDs for 194 countries. The report and portal highlight the extent of global NCD burden, risk factors, and the progress each country is making in their efforts to combat these diseases and conditions. Every two seconds, someone under 70 somewhere in the world dies of an NCD. Noncommunicable diseases like heart disease, cancer, diabetes, and lung disease now outnumber infectious disease as the top killers globally.

“This report is a reminder of the true scale of the threat posed by NCDs and their risk factors,” said Dr Tedros. “There are cost-effective and globally applicable NCD interventions that every country, no matter its income level, can and should be using and benefitting from – saving lives and saving money. I thank President Afuko-Addo, Prime Minister Støre and Michael Bloomberg for their leadership and vision in addressing this major global health issue.”

Bloomberg’s reappointment comes at a critical juncture for public health. During the COVID-19 pandemic, people living with NCDs faced worse outcomes than those without. Today, Gallup released a new survey commissioned by WHO and Bloomberg Philanthropies that found most respondents in five surveyed countries – including Colombia, India, Jordan, the United Republic of Tanzania  and the United States of America rank an NCD or NCD risk factor as the biggest health problem in their country.

The public’s awareness of the links between NCDs and their risk factors such, as tobacco and alcohol consumption, unhealthy diets, and lack of physical activity, is low. Yet, the majority of people surveyed across all countries support a wide number of proven interventions and policies that can reduce deaths from NCDs, such as incorporating more green spaces in urban health design and increasing taxes on tobacco.

“As we continue to respond to this pandemic and prepare for the next, we have seen the critical importance of addressing a major risk factor in COVID-19 hospitalizations and deaths – noncommunicable diseases,” said Michael R. Bloomberg, Founder of Bloomberg Philanthropies and WHO Global Ambassador for Noncommunicable Diseases and Injuries. “Noncommunicable diseases such as cardiovascular disease, diabetes, chronic lung disease, and cancer are the world’s biggest silent killers – but they can often be prevented with investment in proven, cost-effective interventions. I look forward to continuing to make life-saving investments in NCD and injury prevention alongside Dr Tedros and the WHO.”

As WHO Global Ambassador, Bloomberg will continue to support global, national, and local efforts to protect people from NCDs and injuries. This work also advances the 2030 UN Sustainable Development Goal (SDG 3.4) target to reduce the global number of NCD deaths by one-third through high-impact, population-level policies and programmes implemented in cities across the world.

NCDs cause nearly three-quarters of deaths worldwide. Every year, 17 million people under the age of 70 die of NCDs, 86 percent of whom live in low- and middle-income countries. The COVID-19 pandemic further exacerbated the NCD burden by delaying and disrupting care, and in the early months of the pandemic, 75 percent of countries reported disruption to essential NCD services because of lockdown restrictions and channelling of resources. While every Member State of the United Nations has committed to reducing premature death from NCDs by one-third by 2030 – an effort that could save millions of lives – few countries are currently on track to achieve it. Urgent global efforts are needed to get back on track to reach Sustainable Development Goal targets and reduce premature deaths from NCDs.

AsiaFitnessToday.com Heads of State commit to Noncommunicable Disease Global Compact to save 50 million lives by 2030 is licensed under a Creative Commons Attribution-ShareAlike 4.0 International license. Source: https://www.asiafitnesstoday.com/?p=13027