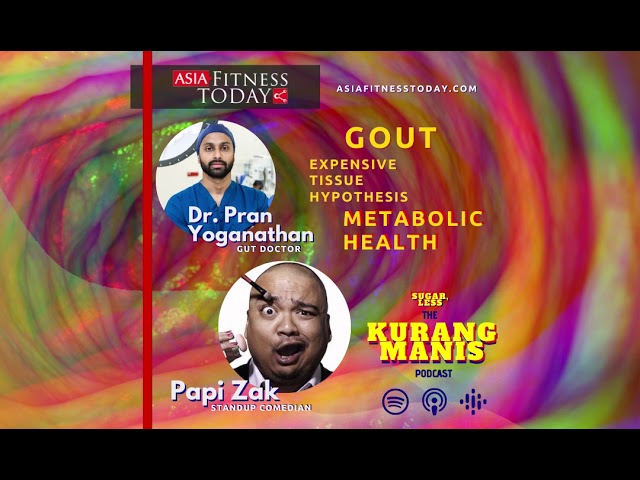 We captured some curious questions from Malaysia’s “biggest” standup comedian and debut wrestler, Papi Zak (www.thepapizak.com), to Australia’s gastroenterologist and Instagram educator Dr. Pran Yoganathan (IG @dr_pran_yoganathan) – he spoke with us on Episode 3. Dr. Pran elaborates on the expensive tissue hypothesis (ETH) which relates brain and gut size in evolution (specifically in human evolution). Listen in to the trailer below for information on gout, uric acid on a high protein diet, our gut and metabolic health.

The full episode of Ep. 4 with Papi Zak – listen below.

Introducing Papi Zak, well known in the comedy circuit in Malaysia and the “biggest” Malaysia has to offer, states his website. For over 12 years, he’s written and performed material for his shows, and has fast established his quirky brand of humour and witty observations on the absurdities of every-day life. Zak was a former LiteFM and REDFM radio broadcaster and his comfortable presence in front of a camera has landed him screen work as the host of two television lifestyle programs – ‘The Halal Foodie’ and ‘Happy Endings’. Zak is currently the brand ambassador for Mr. Potato.

Papi Zak speaks to co-hosts Jasmine Low and Nikki Yeo in Episode 4 about his fitness journey – how he shed over 30kg from his 160kg stature, his childhood as a third culture kid, his mother’s amazing cooking, his new foray into wrestling and his quest to inspire others on the path towards fitness – just as he has. He also indulges us in his relationships… with food!

In the tradition of AsiaFitnessToday.com’s methods of using rhythm and movement as therapy, we introduce a comedy skit by Papi Zak at a TimeOut Kuala Lumpur show to seal off the episode. Tune in to the podcast to listen now.